The Arcane Chambers (a portion of the larger ‘Storeroom’ level of Undermountain, known as the ‘Storeroom’ level) is accessible from the Core section of Undermountain’s Dungeon level. In this area, Halaster and his apprentices excavated the rough stone caverns and mining tunnels left by the dwarves to house their acquisitions and magical experiments. It used to serve as a laboratory for Halaster Blackcloak’s apprentices, and was thus infested with sentient magical experiments and other leftovers.

Magic is particularly strange in some areas of the Storeroom level. In some places, corpses rise of their own accord, and in others magic ceases to function at all. Invisible walls of force also cover some pathways. These walls will move, appear, and disappear at somewhat regular intervals, though some appear to be random.

Physical Makeup: The second level of Undermountain is slightly less interesting in physical design than the Dungeon Level, with fewer, larger rooms, and more walls, floors, and ceilings fashioned out of solid smooth stone. Rather than being finished by the Melairkyn dwarves, it was a labyrinth of mining tunnels that wandered through the rock wherever the ore-veins they were following went, and large, rough caverns where the dwarves dumped the waste rock of their delvings.

Halaster and his apprentices expanded the abandoned dwarven delves into larger and more orderly chambers to house their stores of daily supplies, their collections of interesting items and magical ingredients, and in which to conduct their many experiments. They teleported waste rock out into the sea to be rid of them, or used them up by working the rubble with spells into a smooth concrete of sorts, sculpting pillars, smooth walls, rounded staircases, and chutes. Some of the resulting chambers on this level are among the largest worked rooms (as opposed to natural caverns) known anywhere in the world. 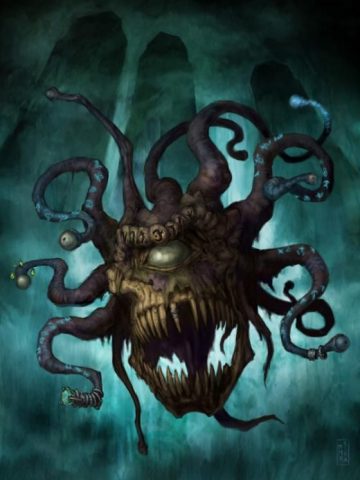 Rumors and Other Info:

“Unlike the Xanathar’s Thieves’ Guild’s goals for the Dungeon Level, the representatives on this level would rather plunder it and sell the takings in Skullport than actually hold their ground for any length of time. Even so, they do have several watchposts here.”

“The Ghost gate dumps out somewhere in the Storeroom… It’s a one-way trip from the back end of a dead-end in Waterdeep’s southern ward. On the night of a full moon you can step right through and end up in a giant chamber surrounded by mechanical knights!”

“The tomb of the necromancer Lord Hund Hiilgauntlet lies here. Turned himself into  a mummy 500 years ago, and he still prowls the halls turning the unwary into his bone soldiers! By night, he emerges to Waterdeep proper to steal vagabonds, the sick, and the dead from the city to serve as raw materials or spare parts for the undead legions he creates. “