During the campaign, you’ll be keeping track of Reputation with each faction (positive, or negative). These reputation points will/can be traded for Renown Ranks with the factions in question, be spent to gain advantage on rolls relating the faction, or spent to gain one-time support from the faction itself.

Emerald Enclave A far-ranging group that opposes threats to the natural world, but recognizes the need for balance between civilization and nature. Many of its members are druids, rangers, or those who worship nature. Members of the Emerald Enclave are spread far and wide, and usually operate in isolation.

Force Grey Otherwise known as The Gray Hands, Force Grey is an elite cadre of adventurers whose fighting prowess is matched only by their loyalty to the city. Whenever Waterdeep has a problem that can’t be handled by diplomats or the city’s other armed forces. the Open Lord has the option to mobilize Force zGrey.

The Harpers A very old and semi-secret organization dedicated to promoting good, preserving history and maintaining a balance between civilization and nature. The Harpers’ ideology is noble, and its members pride themselves on their integrity and incorruptibility. Has spies placed in cities across the realm. Its longevity and resilience are largely due to its decentralized, grassroots, secretive nature, and the near-autonomy of many of its members.

Lord’s Alliance A coalition of rulers from cities across Faerûn, who collectively agree that some solidarity is needed to ensure the safety and prosperity of the cities, and to keep evil at bay. The rulers of Waterdeep, Silverymoon, Neverwinter, and other free cities in the region dominate the Alliance and every lord in the Alliance works for the fate and fortune of his or her own settlement above all others.

Order of the Gauntlet Formed to destroy evil in the world at large. The Order is a dedicated, tightly knit group of like-minded individuals driven by religious zeal or a finely honed sense of justice. Many paladins and clerics of Tyr, Helm, Torm, and Hoar have joined this new organization, seeing it as—finally—a way of making common cause against the evils abroad in the world. 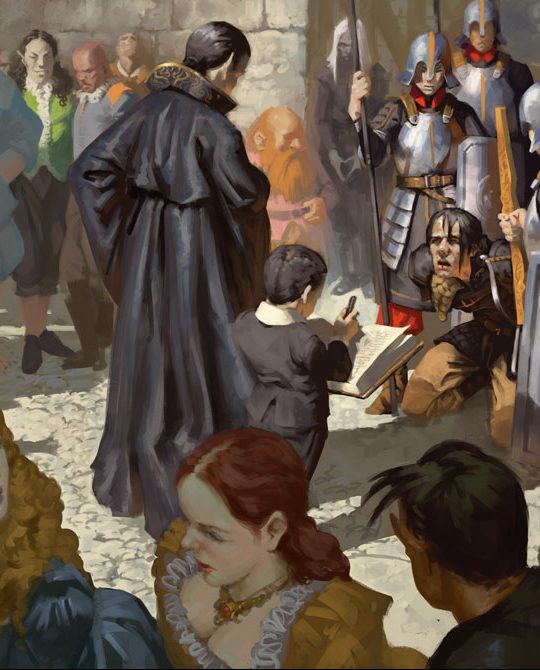 Bregan D’aerthe An elite drow mercenary, and later mercantile, group founded and led by Jarlaxle, primarily based in Menzoberranzan in the Underdark. Despite its loose set of ideals, it has endured for centuries and remains one of the only factions that maintains full scale operations on both the surface and in the Underdark.

The Cassalanters The Cassalanter family has entered into an agreement with the party to help find Neverember’s Enigma, the 500,000 gold crowns located somewhere in the city. They plan to use the money to secure the souls of their 9 year old twins from the archdevil Asmodeus.

The Gralhunds The Gralhunds were somehow involved in search for Neverember’s treasure, and may or may not be out of the hunt. They are a smaller noble family, but their deep mercenary and military ties offer great strength (and numbers).

Xanathar’s Guild The remnants of the old thieves’ guilds of Waterdeep were unified into a single, powerful organization by a strange and charismatic beholder who calls himself the Xanathar. The Guild operates out of Skullport, but has agents hidden in Waterdeep above, if one knows where to look.

Zhentarim An affiliation of merchants and mercenaries known for their cutthroat tactics. The Zhentarim provides the best-trained fighting men and women money can buy, but the cost of doing business with the Black Network can be high. In Waterdeep they are represented by two opposing groups

The Doom Raiders The Doom Raiders came to Waterdeep three years ago to establish a small Zhentarim foothold in the city. In that time, they have forged alliances with various nobles and guilds and run afoul of others, all the while fending off Harper spies. They are loyal to the Zhentarim as a whole, and want to expose and destroy Manshoon before they are themselves apprehended or driven out of the city by the local authorities.

Manshoon’s Network A clone of the dead wizard Manshoon has taken over the local chapters of the Black Network. He has started a gang war with the Xanthar’s guild in an attempt to draw out and destroy the Xanathar and, ultimately, seize political and economic control of the city.