The Market The largest open space in the city is an open marketplace surrounded by stone buildings (many moneylenders and pawnshops among them) that enclose the maze of temporary stalls and carts that appear here day and night. The Market is the best place to haggle for the lowest prices on almost any trade good imaginable, though there’s no guarantee of finding anything.

Mount Waterdeep The name of the mountain on and around which the city of Waterdeep was built. It is a rough, rocky mountain and stands some 1,500 feet above the sea level, to the west of the city. Beneath the mountain lies the notorious Undermountain. The whole of Mount Waterdeep is considered to be in the Castle Ward.

Quill Alley This thoroughfare for the primary neighborhood of clerks, scribes, and cartographers in Waterdeep. It houses many buisiness, as well as the Zoarstar, the Guild Hall for the Scriveners, Scribes & Clerks Guild.

Trollskull Alley An small alley/courtyard in the North Ward of Waterdeep. Home to Trollskull Manor, and other buisnesses.

Undermountain A multi-tiered dungeon, comprised of several inter-connected chambers and lairs located deep beneath the city of Waterdeep and its namesake mountain. Originally home to the dwarves of Clan Melairkyn, the Underhalls were home to a grand dwarfhold before they were taken over by the “Mad Mage” Halaster Blackcloak and his seven apprentices.

Walking Statues These 100-ft tall statues were built as a defense mechanism of the city, but once wreaked havoc due to a magical disaster years ago. They’ve since laid dormant.

The Great Drunkard This Walking Statues that fell backwards onto a building, where it remains stuck to this day. The people of Waterdeep, ever practical, have managed to capitalize on this. Now there is a massive two story alehouse where once there was a collapsed titanic beast, giving the impression that this Statue drank away its problems.

Wards of Waterdeep The city is divided roughly into 8 wards, each of which serves its own purpose. The Castle Ward is the seat of government, the Trade Ward the center of commerce, and so on. 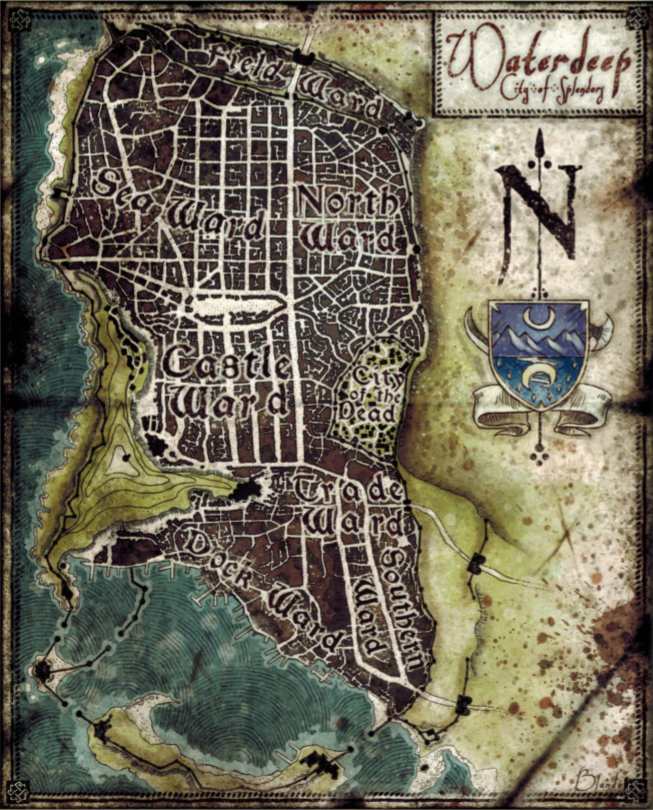 Artheyn Manor A small, three story residence directly across the street from Gralhund Villa. A drow strike team was using the residence as an observation post while the Gralhunds held the Stone of Golorr.

Blackstaff Tower Originally the home of Khelben “Blackstaff” Arunsun. This tower now serves as the residence of the current ‘Blackstaff’, the arch-mage of Waterdeep. The forbidding structure is one of the most recognizable landmarks in the Castle Ward.

Cassalanter Villa The Cassalanter noble house of Waterdeep is among the richest families within the city, having made their fortune in banking, money-lending and rumor-mongering for the highest payer.

Font of Knowlege The temple of Oghma in the Castle Ward district of Waterdeep. It is a favorite among sages and scholors, as it also houses the largest public library in the city.

Gralhund Villa House Gralhund is a noble house of Waterdeep, since the Year of the Broken Blade, 1260 DR. Their primary business interests included contracting sellswords and manufacturing weapons. Local rumor says that the family has fallen on hard times in recent months.

House of Inspired Hands The temple of Gond, in the Sea Ward, is equal parts temple, museum of oddities, and bustling workshop. The symbol of Gond, a four-spoked cog, is displayed prominently above the gates and the din of hammers can be heard throughout the surrounding neighborhood. Though it features less marvelous creations than its counterpart in Baldur’s Gate, the small hall of inventions in the temple atrium is still worth a visit.

Inn of the Dripping Dagger A favored bar and home to many adventurers, mercenaries, misfits and soldiers in the city of Waterdeep. Dalakhar, the gnome, kept a room here until his death in Trollskull Alley.

Kolat Towers The building known as Kolat Towers started out as an old stone manor and a pair of sturdy cottages. Before 1368 DR, the wizard brothers, Alcedor and Duhlark Kolat, bought the buildings and, much to the chagrin of the local building guilds, stitched the building together using spells such as wall of stone and stone shape. The guilds of Waterdeep petitioned to have the building condemned, but were unsuccessful.

Lightsinger Theater A high-brow performing arts center and opera house located on the southwest corner with Bazaar Street in the Castle Ward. Mirt the Moneylender has a private box here.

The Mermaid’s Arms A rowdy tavern and festhall run by Ms. Calathia Frost. It is a favored spot for many freebooters and pirate hunters commissioned by the Lords of Waterdeep; located on Dock Street

The Old Xoblob Shoppe A curiosity shop in the Dock Ward. Famous for the stuffed beholder that hangs above its front window by the main counter.

The Raging Lion A large inn and tavern on the east side of the Trade Way in the north of Scornubel. It is well guarded and has secure stables. It is generally unclean throughout, and a dirty gilded lion stands outside. The staff of the establishment are known for being slow and leisurely.

The Road House This large compound of stables and warehouses in the Trades Ward serves as the headquarters for the Fellowship of Carters & Coachmen. While the yard is publicly accessible, the main house is restricted to guild members only.

The Skewered Dragon A tavern in the Dock ward, located in an alley off of Net Street. It is a dark, bawdy tavern where activities such as gambling and drinking are popular among working class folk. It’s known, locally, for the rusted ship’s anchor is lodged in the roof. It’s a dive bar, in very poor shape, but popular among dock workers, gamblers, and those with poor taste.

Trollskull Manor As a reward for rescuing Floon, Volo gave the party the deed to a building in the North Ward, that looks out into a wide cul-de-sac hemmed in by old residences and shops. The property used to be a tavern, with a residence on the upper floors, but has fallen into disrepair.

Yawning Portal Inn Waterdeep’s most famous inn, named for the large “well” within its walls that down into the dungeon of Undermountain. A common destination for would-be heroes. It’s located a few blocks from Castle Waterdeep, in the Castle Ward.

Yellowspire A Castle Ward tower so named because its bricks have a pale yellow tinge to them. Plans were in place to convert the tower into a temple of Bane, but was thwarted by the party. A teleportation circle is located in the basement, but it’s target destination is not known.