The first people to settle the inside of Mount Waterdeep was a clan of dwarves called Melairkyn. Among other places, they lived in what was later called the Sargauth Level. Many of their ruins still dot the monstrously sized level’s landscape. Hundreds of years after the settlement of the clan Melairkyn, a group of Netherese spellcasters founded one of their enclaves inside the mountain. Historians later referred to it as the Sargauth Enclave. The settlement is beleived to have lasted until the end of the Netherese Empire, when it was dstroyed by Karsus’ Folly (a world spanning magical disaster). Hundreds of years layer, the ruins of this settlement would become what is now known as Skullport, the Port of Shadows.

In recent years, Sargauth has also become home to a beholder known variously as the Eye and the Xanathar. In the last decade, the Eye has aggressively sought to dominate smuggling operations in Skullport, in particular the landward trade. The Eye controls an extensive slaving operation in the Port of Shadow. It’s operations run largely unopposed, since his destruction of the Shadow Thieves years ago.

Physical Makeup: The Sargauth Level is named after the River Sargauth, a slow, inky-watered river that winds its way through this level of Undermountain. It is by far the largest, and most populated level of Undermountain. It connected to Skullport by way of a tunnel and the River Sargauth. It once also held the ancient town of Stromkuhldur, which fell into ruins before the late 15th century.

Broadly, the Sargauth Level could be divided in two areas. First, ruins that were once a Netherese enclave, as a matter of convenience called the Sargauth Enclave, which suffered a major cave-in. Second, north to the first part was the part that was excavated by Halaster Blackcloak and his apprentices. The latter part took about two-third of the entire Sargauth Level. 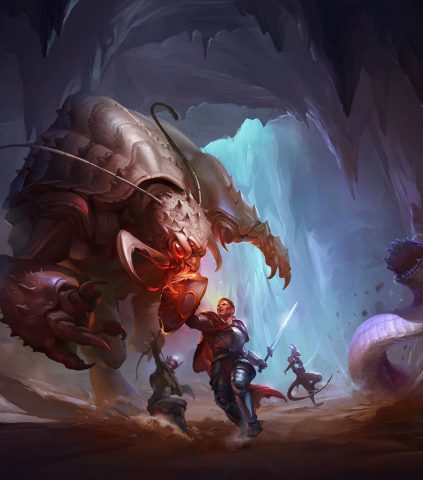 Rumors and Other Info:

“Drow and goblinoid parties have been in near constant conflict for hundreds of years as they seek to gain control of the dwarven ruins on the Sargauth Level. They keep the fight clear of Skullport, so the Eye doesn’t need to bash any heads.”

“There’s a ring that the Mad Mage lost on the 3rd level. If you find it, It’ll teleport you straight to the Cavern of the Throne. It’s said that if you conquer the evil there, you’ll be made king of Undermountain!”

“If you find yourself in a many pillared hall, beware. The pillars are either traps or portals and the whole place is lorded over by a vampire.”