Undermountain? Ah, yes. A great place to have fun, the most famous battlefield in which to earn a reputation as a veteran adventurer – and the largest known mass grave in Faerûn today.

Tales of this legendary dungeon below Waterdeep are told well by many in the city, but I’ll provide you with the basic truths here.

Beneath the plateau of Waterdeep lies the largest and deepest dungeon in the world. It sprawls out under the city, said to plunge as many as twenty levels deep. The Melairkyn dwarves first excavated the tunnels that would become Undermountain, and the drow are said to have dug their own tunnels up from below. All were claimed, altered, and expanded by the mad wizard Halaster and his apprentices- who are believed to dwell in the dungeons to this day. What drove them deep into the earth remains a mystery, but Undermountain’s allure is a siren song that still draws many.

If you want to see adventurers descend into the depths, or perhaps glimpse some returning with wondrous treasures, visit the Yawning Portal in the Castle Ward.

In times long past, at least a thousand years ago by most folks telling, the wizard Halaster Blackcloak whirled to the base of Mount Waterdeep, called there from a distant land by chance or providence. Halaster brought with him the Seven, as his apprentices were known, and with their help and his power, Halaster summoned beings from other planes to build himself a grand wizard’s tower. Halaster ringed his tower with a great wall set with lesser towers for each of his apprentices. Over time, homes and fields sprung up around the complex, as servants need housing, too, and everyone needs food. This small hamlet would one day grow into the grand city of Waterdeep….but we’re getting ahead of ourselves.

While the years stretched on above, Halaster continued to use fell creatures from other planes for construction beneath his tower. At length, Halaster’s tunneling broke into the Underhalls, a complex of tunnels built long ago by the Melairkyn clan of dwarves. The Melairkyn had long since been killed or dispersed, but other creatures had taken up residence in their absence. There, Halaster found warring factions of duergar and drow fighting for control of the mithril mines that the Melairkyn had left behind. He began a crusade against both races. The duergar quickly fled, and left the drow to fight Halaster and his minions alone. Halaster captured or killed the remaining drow, entrapping their souls for dark magic. When the last of the drow were defeated, Halaster Blackcloak tunneled on, continuing his obsession with delving beneath the mountain. 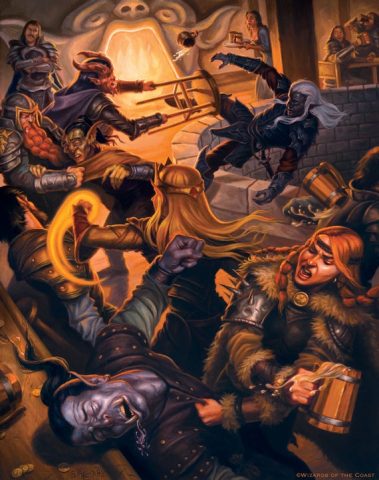 After Halaster was absent for some time, his apprentices ventured into his tower in search of the great wizard. They found traps, monsters, and tantalizing hints about power beneath the earth. Individually they explored the dungeons, encountering ever more deadly traps and more powerful foes. For their efforts, they were rewarded with riches and magic. The Seven were reduced to five, and some time later Halaster appeared to his students and explained that he had built the tunnels to guard his experiments and treasures.

What happened after that is unclear, but only one apprentice is known to have left Undermountain, never to return. Halaster continued to live beneath the mountain, using it as a base from which he traveled to other planes and distant lands, entrapping strange creatures and bringing them back to live as prisoners or guardians in his home. In time, Halaster sought out magic to extend his life, and some say that it was these spells and items that finally drove Halaster insane. While before he had been obsessed and deranged, his quest for immortality seemed to drive him truly mad.

While Halaster quested on other planes and sequestered himself in his tunnels, his tower fell into ruin. In time, the city now known as Waterdeep came to huddle against the mountain and reach down to the harbor. As the city sprawled outward, it reached and encompassed the ruins of Halaster’s home. Undermountain was known to these early settlers, and they often punished criminals by sending them into its depths. This continued for many years. Eventually, an adventurer named Durnan delved into the depths beneath the tower and returned, laden with riches, to tell the tale. Durnan demolished the last remnants of Halaster’s above-ground abode and built an inn over the well he had used to descend into the depths. He called his inn the Yawning Portal.

Halaster doesn’t make it easy for creatures to enter or leave his dungeon. No spell can be used to enter Undermountain, leave it, or transport oneself from one level to another. They simply fail, as do spells and items that banish a creature to another plane of existence. Luckily, summoning spells seem to function normally in Undermountain, as does magic that involves an extradimensional space. Spells that allow contact with beings from other planes function normally.

Another effect of the many-layered magic of the Mad Mage is that most of the dungeon radiates strong magic including the floor, ceilings, and walls. This makes spells like detect magic useless half of the time. The radiated magic often acts as some kind of background noise, masking the magical auras of other things.

Undermountain has some areas where magic just doesn’t work. The origins of these are not exactly known, but its suspected to be the result of massive magical experiments by Halaster and his apprentices.

Undermountain’s got surprrisingly good ventilation, due to a plethora of air sources and some magical support. While areas where the ventilation is bad do exist (for example due to a sealed door or being connected to sewers) death from suffocation or gas explosion aren’t really hazards that you need to prepare for, as high priority.

All in all, Undermountain’s climate can be compared to a normal Waterdhavian cellar…a bit cold and a bit dank. When an area is more humid than what was normal, it could mean that a water source is nearby, sometimes also fungal growth. When its drier than normal, it usually means that you’re far from a water source. Interestingly, deeper levels seemed to be a bit warmer than the upper ones.

Falling Stair: Mantis had a vision of a long sealed stairwell, connecting the dungeons of Castle Waterdeep and a place called ‘the Citadel of the Bloody Hand’ with Undermountain’s first level.

The Upper Levels of Undermountain (the three closest to the surface) are most commonly referred to as the Dungeon Level, the Storeroom Level, and the Sargauth Level. They have always been the busiest areas—more sorts of numerous, organized beings and more surface creatures roam these levels than any others.

The first level of Undermountain is directly connected to Waterdeep by the Yawning Portal, and was long used by the Lords of Waterdeep as a dumping ground for undesirables, hence its most common name.

Once called the ‘Storeroom Level’, on this level, Halaster and his apprentices excavated the rough stone caverns and mining tunnels left by the dwarves to house their acquisitions and magical experiments. Some of the resulting chambers on this level are among the largest worked rooms (as opposed to natural caverns) known anywhere in the world.

Undermountain’s third level is named for the River Sargauth, a slow, inky-water river that begins at one massive water-portal and ends in another. The northern two-thirds of this level were constructed by Halaster and his apprentices, while the southern portion is home to Skullport.