Adventurers  A large host of adventurers flood the city at any given time. Some have established themselves as citizens of good standing and remained permanently, while others have drifted off for other climes or met their ends. With the exception of the Gray Hands, secret societies such as the Harpers and the Red Sashes make up the closest thing to organizations drawn from this group.

Crime The last official thieves’ guild in Waterdeep was destroyed in 1300 DR, and while there were many claimants to that position and title over the years since, none have risen to prominence in the city. This is not to say that there is no thieves or crime in the streets of Waterdeep. Rather, crime there is random and dispersed. Many consider the Xanathar Guild to be the ‘defacto’ theives guild in Waterdeep, however this secret organization is technically headquartered in Skullport.

Economy Economic activity in Waterdeep has been dominated by the city’s dozens of guilds for more than three centuries, and virtually all commerce flows through them.

Government The city is governed by an anonymous a council whose membership is largely secret. They are are in turn led by the Open Lord of Waterdeep. These hidden Lords of Waterdeep maintain their identities behind magical masks, called Helms, and while they rule in public, none knows the true identities of most of them.

Guilds The most noticeable factions in Waterdeep are the guilds—powerful merchant and craft organizations that controll much of the life-blood of the city. Once, the guilds ruled the city in it’s entirety, and it almost destroyed itself in a series of internal commercial wars. No one wanted to see those days return.

Law The City Watch is the local police force, and enforces the day-today law in the city. Waterdhavian justice is dispatched by the Magisters, who direct the common courts of the city. These Black Robes, as they are often called, are empowered to pass sentences. Both are swift to mete out justice as needed and are guided by the Code Legal.

Merchants A rising merchant class exists outside the standard guilds. These caravan and coaster operators use Waterdeep as a destination for their caravan goods. More shops offer a variety of different goods because of this growing group. The most notable of these new merchants is the retired wizardess Aurora, who has established a magical retail organization to supply a wide number of patrons across the North with specialized items.

Military The City Guard (and its famed griffon- riders) serves as Waterdeep’s soldiery and its members staffed garrisons, road patrols, and watchposts, and served as bodyguards and gate guards. They defend the city from outside threats, along with the Watchful Order of Magists and Protectors.

Nobility The Waterdhavian nobility consists of arround 80 families of varying degrees of power, most of whom can trace their lines to before the founding of Waterdeep itself. Many powerful names have come out of Waterdeep, including the Amcathras (whose scion became Lord of Shadowdale); the Cassalanters, wealthy moneylenders; as well as the Wands, a family of powerful and noble wizards. 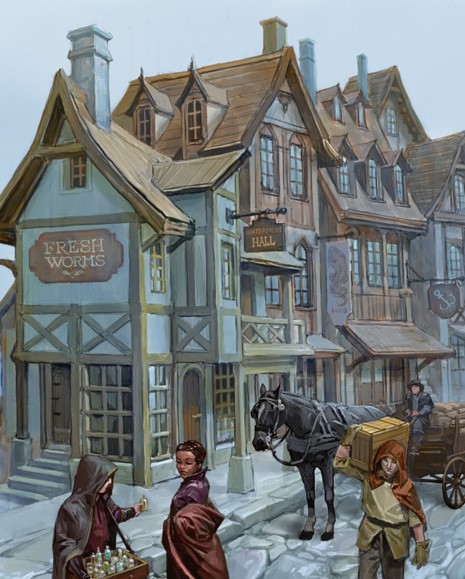