The campaign begins in the month of Alturiak, as  the city slowly crawls out of Winter, and into Spring. In Waterdeep, early spring tends to be cold and damp. Misty rain falls for days on end. It’s common for fog to settle at night and last through the day. As the weather improves, the city attracts more visitors, and the streets become increasingly crowded as summer approaches.

The Faerunian calendar has twelve months that roughly correspond to the months of the Gregorian calendar. Each month has thirty days divided into three ten-day weeks (each week is called a tenday). Scattered throughout the year are five holidays that aren’t considered part of any month. Once every four years, the holiday of Shield meet is added to the calendar as a leap day immediately following Midsummer night. Collectively, these days create a cycle similar to what we have on Earth: three 365-day years followed by a leap year.

Flamerule (“Summertide”)
• Midsummer between Flamerule 30 and Eleasias 1
• Shieldmeet occurs the day after Midsummer, once every four years 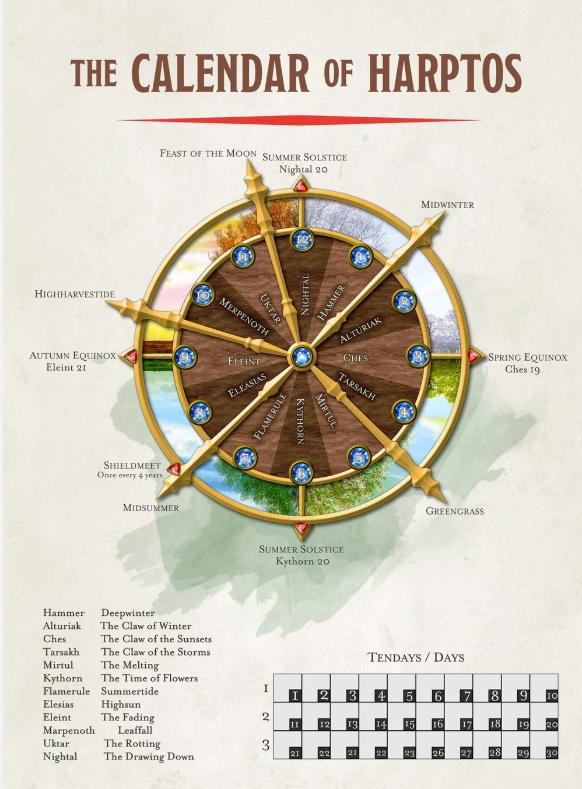 20
-The Fireball explodes in Trollskull Alley.

-Stake out and search Fenris Stormcastle

26
Party gets info from Mirt/Harpers