House Gralhund is a noble house of Waterdeep, active since the Year of the Broken Blade, 1260 DR. Their primary business interests included contracting hireswords and manufacturing weapons. Gralhund Villa sits in the middle of an upper-class residential neighborhood in the North Ward. The streets around the villa have pedestrians and coaches traveling along them at all hours, though traffic is heavier during the day.

The Gralhund family keeps a villa in Waterdeep’s North Ward between Saerdoun Street and Horn Street off of Pony Way. The villa grounds are enclosed by a twelve-foot high stone wall with a main gate onto Horn Street. The entire compound is roughly wedge-shaped and is approximately 23,000 square feet of space total.

The main building is two-stories tall and approximately 13,000 square feet total. A 1,580 square foot, single-story guard barracks adjoins the manor house, and there is a separate, single-story, 2240 square foot stable with an entrance onto Saerdoun Street.

The blocks immediately surrounding the manor house consists mostly of smaller noble apartments, shops, and rooming houses for merchants and servants in the North Ward.

On Ches 21, 1492, Gralhund Villa was the site of an assault by several rival factions, searching to recover the Stone of Golorr. Lord Orond Gralhund was gravely injured, and many household servants and retainers were killed. The heroes of Trollskull Alley were there,  recovered the Stone, and escaped. 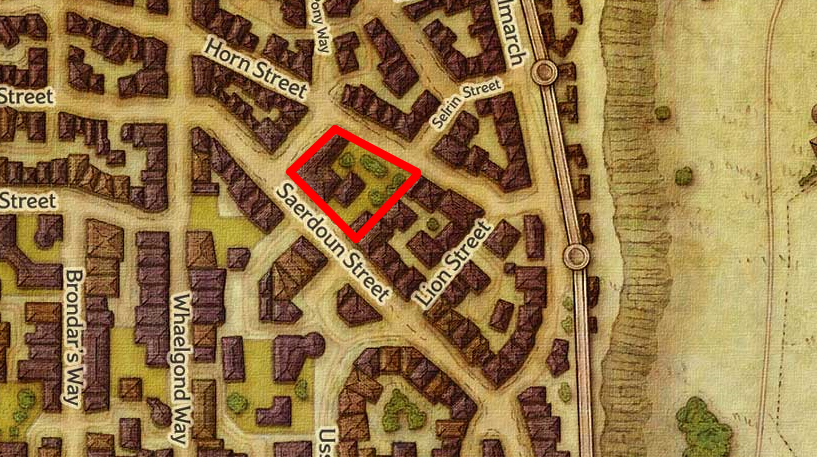