The party continues to explore the third level of Undermountain, the ‘The Sargauth Level’.

The party rests for a short while, after the big fight with the drow torturers. Mantis and Shining Brow take a look at some of the treasure that they’ve found, and Shazuu and Tang slip away, back to the prison to ‘take care’ of the locked up drow males. They return a short while later, just as the spellcasters have finished examining the treasures.

After considering their options, the group takes a vote… do they continue on to the south, through the windy caverns, or do they head back north and deal with more Drow. Shazuu strongly advocates for more drow killing and the group decides to backtrack and check the large double doors that they crept past on their way in.

Once there, Mantis and Shining Brow examine the door, and hear loud choruses of gutteral deep-speech emanating from beyond. A quick glance reveals an immense chamber strewn with spiderwebs. The room is so large that even their enhanced vision can’t see it in it’s entirety, but it has the look of a temple. Alabaster translates some of the drow speech, and it becomes obvious that some sort of ritual is taking place in the room beyond. 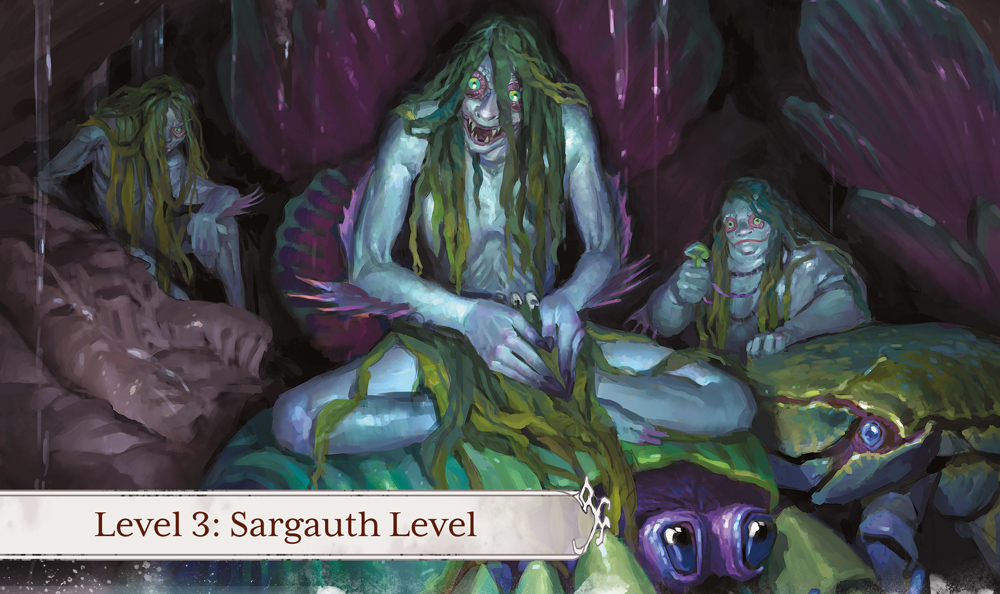 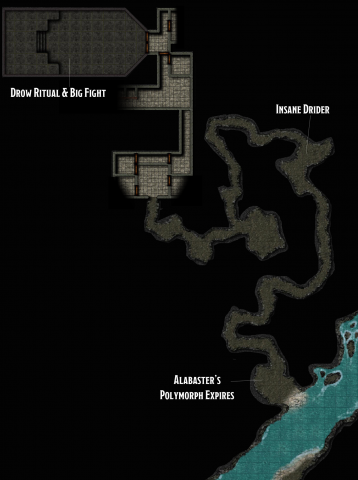 Alabaster is concerned that his former adventuring party may be imprisoned in the room. He professes himself to be a master of stealth, and volunteers to scout the area. He casts a spell of invisibility on himself, and sneaks into the room on magically silent feet. Unfortunately, he grabs the door handle behind him and slams the door with a loud BANG. The drow inside must have been alerted, the party decides, so they take up defensive posture and wait.

Alabaster, seemingly unaware, scouts the room. It’s immense, and the far end is setup as some sort of alter. A drow priestess stands over a captive, chanting. several other drow, and gigantic spiders, flank her as she chants, and guides hundreds of tiny spiders into the captives mouth and nose. The walls are covered in spiderwebs, and cocoons… many of them burst open from the inside, revealing mangles humanoid corpses. The drow are on alert. They scan the room while the priestess finishes her ritual. Alabaster continues forward, looking for his companions, confident in his abilities.

The drow scan the room, and eventually, examine the door. After one of them pulls it open, the fight is joined! A furious battle between the party, the drow, and the spiders erupts. Eventually, the party is victorious. After searching the now-silent room, Alabaster finds his companion in one of the burst cocoons, a victim of the spiders.

The fight was more than the party had thought that they would face, and their hobgoblin companion pantomimes that there are even more drow to the north. With this news, the part reconsiders, and heads back south to the windy caverns. Mantis takes the lead, and they head off into the web-choked passage. The halls are extremely loud, filled with a humming and shrieking of wind moving through the many side passages. After several turns and twists, they find themselves in a large cavern with a strange half-drow / half-spider prowling back and forth. The creature seems near-mad, raving at the walls, covering his ears at the noise, and shouting in our in the drow’s guttural language. Alabaster comes forward and translates his words:” Stop! Make it stop!” This gives him an idea…. He casts silence on the room, and the drow looks stunned. And he mostly ignores the group as they move through the room.

Alabaster decides to communicate, inviting the now docile creature with them. Some telepathic back and forth reveals that the creature cannot leave, for one he can’t fit through the door, and for the other he claims to be cursed. Alabaster polymorphs the drider into a mouse, gathers him up, and puts him into a pocket.

The party contiues on to the South, and eventually comes upon a beach-like exit, overlooking a brackish slow-moving river– The Sargauth River, which is known to flow through Undermountain. As the party takes stock of their surroundings, Alabaster places the mouse on the ground, casts ‘remove curse’ upon it, then drops the polymorph spell. Unfortunately, the drider is unchanged physically. His ‘curse’ of madness, however, has been lifted and he attacks the group! The party is exhausted, but they manage to defeat him. The river heads east and west, and they sit to discuss which way to go.