The party finishes their preparations and enters Undermountain, and begins to explore the ‘Dungeon Level’.

The party prepares to descend into Undermountain to begin their current task: search for magical items to sell to Obaya Uday.  One of the dwarves agrees to take over the day to day operations of running Trollskull Manor. Shining Brow has purchased rations and gear, Mantis borrows several barrels from the bar to fill with water, and when they feel sufficiently prepared, the group heads to the Yawning Portal Inn.

After paying Durnan the toll (one gold coin) to descend, Mantis and Tang Wu step onto the platform and are lowered into the darkness below. The platform hits the ground, and they look around to see a round chamber full of junk. The walls are covered in graffiti from previous adventurers.  20 or more shields hang on the walls, emblazoned with the house emblems and noble sigils. Tygorr and Shazuu begin their descent, and Shining Brow leaps off the edge and floats softly downward thanks to a “feather fall” spell. Below, Mantis discovers a hidden slot, but cannot ascertain its use.  The party meets up in the chamber beneath the entry well.

Shazuu decides abruptly to move out, and exits the room, heading down the only visible exit: a hallway. The party eventually follows, and begins to refer to a pair of maps that Mantis uncovered during his day’s research. 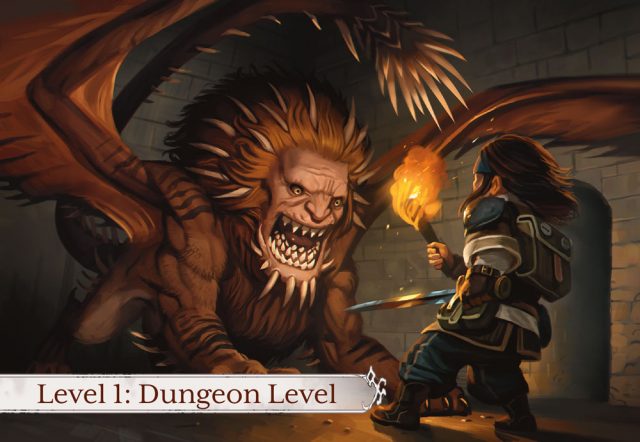 The group proceeds through a passage, and passes through a hallway lined with bas reliefs of demons and devils.  As Shazuu begins to identify each, Mantis notices that a carving of a dretch has strangely colored eyes. Pushing on the sculpture, it swings back to reveal a short doorway that leads to a small room.  Mantis, Shazuu, and Shining Brow’s familiar enter. At the center of the chamber is a wooden armor stand draped with a chain shirt, with a sword driven through it’s chest. A skeletal hand lies on the floor next to it. Mantis hears faint voices as the rest of the party enters.  As the party discusses magically identifying the armaments, Tang Wu picks up the sword to inspect it, only to find he cannot put it down, nor release it from his grasp. Mantis cannot dispel the curse on the blade, and various arguments ensue. With no solution at hand for Tang Wu’s dilemma, the party moves on.

Shazuu heads south down a passageway, to a room filled with pillars.  A sign at the south exit reads “Certain Death This Way”, so the tiefling leads the group down the western passage instead.  This hallway is filled with niches on either side, evenly spaced, leading a few feet back. Each contains a single full length mirror.  As the party is mostly through the hall, dark figures begin to step from the mirrors and attack the group. As the battle begins, the group realizes that the shadowy figures are mirror opposites of themselves, that drain the strength from their victims.  The group eventually defeats their shadow selves, and moves forward into a room that contains the remains of a campfire. They take a short while to rest and regather their strength.

After an hour, or so, the party forges ahead.  Shining Brow scouts a side passage, and hears voices.  Peeking around a corner, he sees a band of goblins dancing and chanting.  He heads back to inform the party, and Tang decides to launch an attack, using his handy new weapon.  As the group bursts into the room, they see the goblins dancing and chanting a name, as a skeletal figure seems to dance madly.  As Tang attacks, the goblins manipulating the skeletal puppet drop it and join the fight. The party joins the fight, and Shazuu and Tygorr intercept and destroy two bugbears advancing from a nearby chamber. The group nearly defeats the all of the goblins, but one escapes to alert another group in an adjoining room.  Tygorr puts them to sleep and the group finishes off the rest. Tang attempts to shift the cursed blade to the hand of a goblin, but is unsuccessful.

They begin to examine the corpses, and as Shazuu loots the bodies of the bugbears, a translucent brain creature rises from the skull of one of the monsters. It attempts to enter his skull, but he resists, and Tang destroy the intellect devourer. The group recovers no treasure, and moves forward. Tang continues to try to unhand the blade, but his ham fisted efforts to uncurse himself remain out of his grasp.

The party advances to a room that ends in a portcullis.  Skeletons litter the base of the grating, and two pillars stand on either side of the room. The party moves on, but Shazuu stays behind to examine the pillars. He steps between the two pillars and, suddenly, disappears. A room away Shining Brow and Mantis find the skeleton of a tiefling shained to a wall. It’s missing its legs and ‘Talk to me’ is written in blood above it’s hear. The group notices Shazuu’s absence, Tygorr lights his lantern, allowing him to see that Shazuu has been turned invisible. In a fit of anger, Shazuu punches the tiefling skeleton, shattering it and making himself visible.

The group experiments with the pillars, but cannot replicate the invisibility effect. Tang decides that he is no longer an effective combatant, and returns to the surface to have the cursed blade removed. He’ll catch up later. 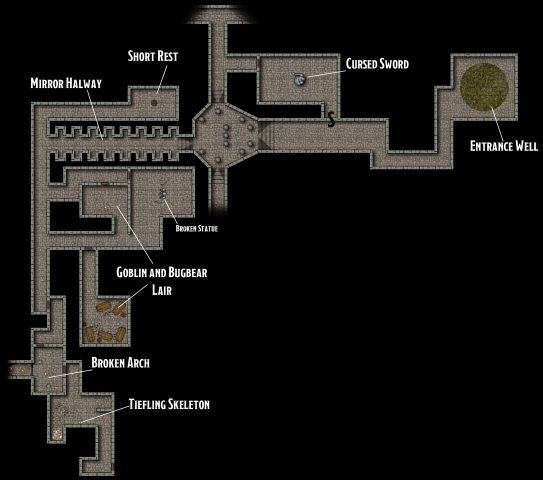