The party continues their trek through the famed Blue Alley.

The party is still stuck in the mysterious Blue Alley.  Tygorr hauls the statue of the unicorn Mirt sent them for, but the group is no closer to escaping.  They stand at the entrance to a huge chamber, its floor obscured far below by fog, and the ceiling high above.  Several floating platforms leads to a sword hanging in the air. As the group begins to plan how to cross, Tygorr spreads his angelic wings, soars across, and grabs the sword.  He returns with the magical moon touched blade.

With no other way forward, the party turns back, and decides to investigate two doors they had bypassed earlier. Inside the first is a pit, filled with spikes, an obvious trap. Inside the second door is a hallway, with walls covered in murals of flying creatures.  More interesting are a series of copper rods set in the walls 15’ in the air. Pure electrical energy arcs between them. The group decides that they have obtained the statue, and should probably leave in safety.

The group backtracks to the entrance. They find the platform with the sign-in book, but the way out is blocked by a semi-transparent shield blocking their egress.  After a brief discussion, they agree to return to the electric passage. 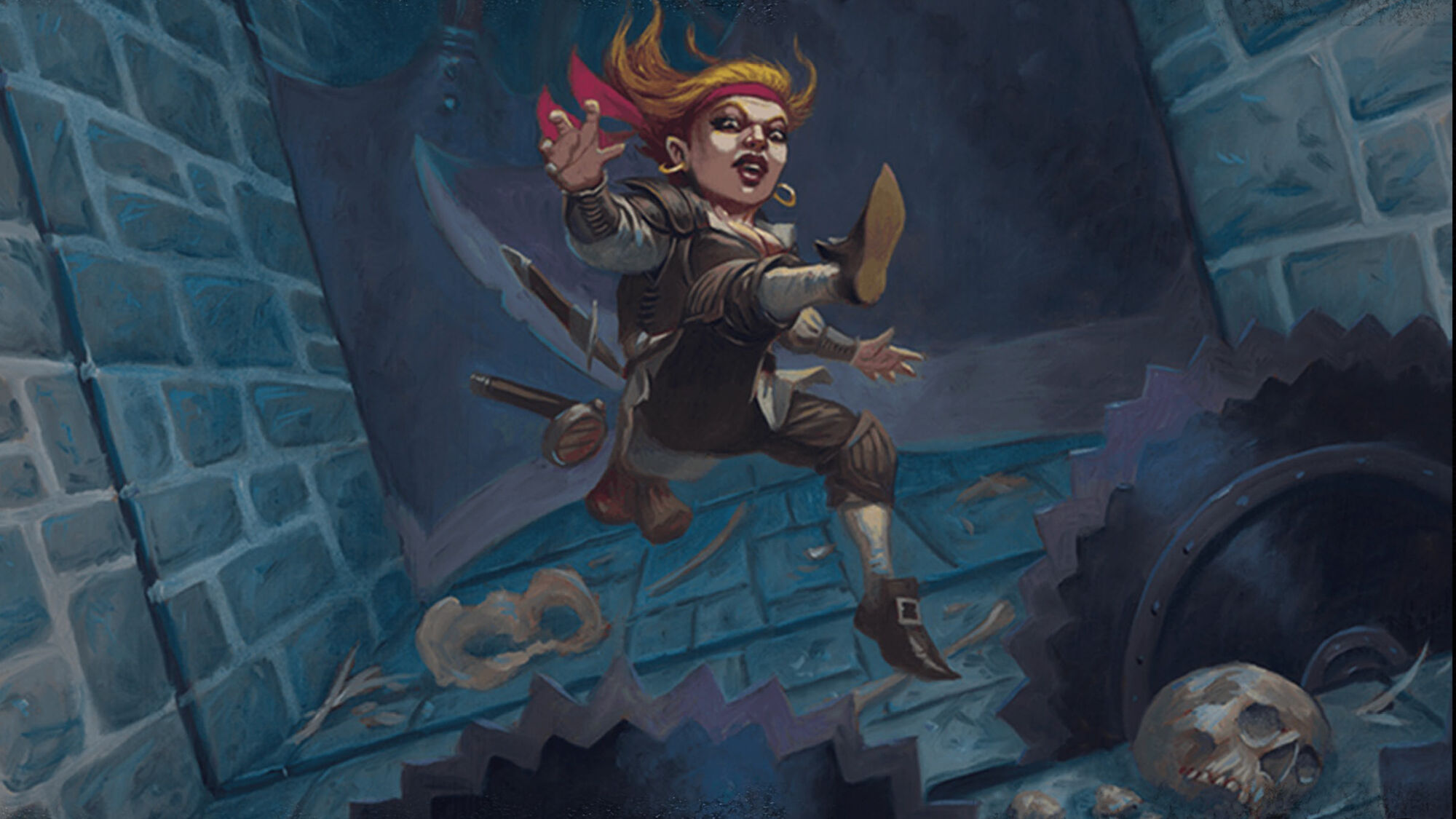 Shining Brow once again takes the lead, as Shazuu’s metal clad body may be dangerous.  He crawls underneath the arcing energy to the safety of a chamber beyond, marking trapped stones as he passes.  Unfortunately, upon reaching the safe chamber beyond, he sets off a switch which re-arranges the pressure plates in the tunnel, sending his comrades into the electricity.  The group passes though, as Shining Brow uses the silver key to open the silver door. The door swings open, and dozens and dozens of metal balls pour out, knocking the tabaxi over, and spreading into the hall of electricity and into the spiked pit.  Both straps are set off, and effectively nullified. Behind is a wooden door bound in iron. The new door is covered in carvings of bears, one with a single arm.

The party re-groups and opens the wooden door.  Behind is a room full of junk and trinkets. Something shiny catches Shining Brow’s eye, and he bolts across the chamber, only to get snatched by an invisible bear trap buried in the junk.  On the far side of the room, a wall opens, revealing skeletal warriors who shamble forward carefully to attack the party. Shining Brow escapes the bear trap and attempts to make his way back to the group, only to be caught again.  Shazuu and Tygorr blast the skeletons from the doorway with a combination of eldritch and divine magics as Shining Brow escapes and gets trapped again. As the last of the skeletons fall, Tygorr heals Shining Brow’s mangled legs, and the group cautiously makes its way to the door across the room.  As they search for the invisible bear traps, they begin to find some interesting items, including a wand, a pouch full of dice, and a creepy porcelain doll, which Tygorr smashes as it starts to speak. They reach the door to exit the junk room, and find another challenge. The hallway beyond is full of spinning blades extending from the walls and floors.  Shining Brow spends a moment, and with his feline speed, races to the far end of the hall and pulls a lever, which stops the death hall.

The door at the end of the blade hall leads to a circular room.  A lone pillow sits on a platform, and on top of the pillow is a single unique coin.  The group realizes this will gain them access to the “Coin Room” and rush back through the Blue Alley.  Tygorr inserts the coin, and the door opens to a small room. A pedestal holds a single lantern covered with runes, sitting on top of a note.  Tygorr takes the lantern, and reads the note, which offers congratulations, and says to cross your name off the book to leave. The party scrambles back to the beginning.  Tygorr begins to scratch off the party’s names, and each finds themselves outside the shield. They also notice that Tang’s name had been scratched out. Shazuu settles his bet with the old men who sit at the entrance, and the party returns to Trollskull Manor.

Back at the Manor, they settle in to identify the items they found, and Mantis takes the unicorn statue back to Mirt.  The group gets their payment, and sleep. The next few days are spent running the affairs of the Manor, and Tygorr finally begins to run his gambling table.  On the 14th of Tarsakh, a strange visitor arrives. A woman from Chult, sent by Volothamp asks to hire the party. She says her name is Obaya Uday from Port Lanzaru, and was sent by the wizard Okama Wakanu.  The city of Waterdeep is famed for the magical items that can be purchased in the streets, but she has had little luck. She has heard that many magics are hidden in the Undermountain beneath the city, and she is willing to pay for any that the party can procure.  She will be staying at the Yawning Portal for several weeks, and apparently has a fortune at her disposal. The party agrees, and begins preparations. Shining Brow obtains supplies and spell components. Mantis speaks to the Harpers to get a bag of holding to carry our loot.

As preparations near completion, the group receives a note from Durnan at the Yawning Portal.  It contains two warnings as to the dangers awaiting them, and warns us of a mage named Halaster who has made his home there.  Durnan suggests looking for the Arcane Chambers, The Willowood, and Selune’s Tears. He also asks if we reach Skullport that we visit the Guts and Garters, and see someone named Quietude about 100gp owed to Durnan.