As the party makes their way into “The Umber Hulk Tunnels” (dubbed “The Earth Hole” by Mantis), the group stops to have a not so brief (and eventually confusing) conversation to assess their goals and issues.  Alabaster ponders whether or not he has a magical means to remove curses. As a solution, the group tries to rule out possible magical problems with Shazuu and Tang Wu, but they run into communication problems.

Eventually, Shining Brow and Mantis cast spells to identify any magical effects hindering the two adventurers. They find that neither are currently being affected by any unknown magic, but Tang Wu seems to have a place of “emptiness” in his soul.  When Shining Brow investigates, he begins to feel uneasy, and abruptly ends his spell. Alabaster casts a spell of restoration on Shazuu in an attempt to free him of any curses. Shazuu feels restored, and the party begins to move forward once again, satisfied for now. 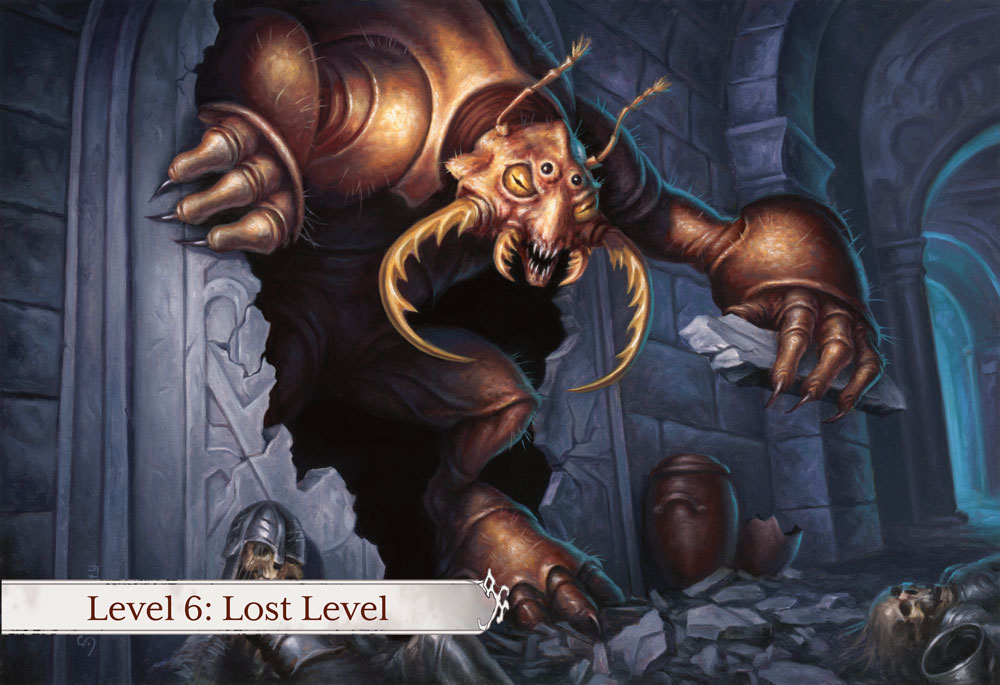 Mantis leads the group forward, as the natural tunnels open up into stone passageways.  He checks a chamber, and sees four large stone tables. A large creature with three arms and three legs (a Xorn) moves about the rubble in the room.  It says (in an unknown language, translated by Shazuu’s magical skullcap) that it smells food coming from the party. Mantis retreats but the creature follows him into the passageway.  Shining Brow throws a crystal collected after the previous xorn encounter, which the elemental chases down and quickly devours. The xorn grabs a money pouch from Mantis, and dumps it’s contents into its maw.  Shining Brow moves away from the party, keeping his distance from the creature and leaving a trail of crystals. The xorn follows the trail away from the party, and stays away as Shining Brow returns to the party.  The remaining members of the party investigate the room with the stone tables, but find nothing interesting. 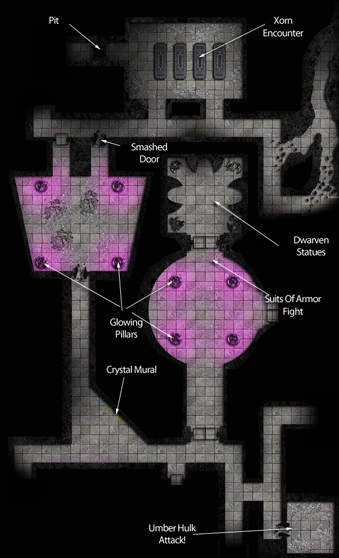 Tang Wu, Mantis, and Kherek decide to investigate a pink glow coming from further down the passageway.  They discover a chamber with destroyed stone furniture in four piles of rubble. Mantis finds enough unbroken tools to assemble a jeweler’s kit.  Two of the doors in the room have been broken as well.

Mantis and Kherek lead the party forward through the broken doors into a triangular room. One wall is covered in a carving of dwarves throwing gems to a xorn.  Kherek pries one of the gems loose. Mantis hears a ruckus ahead, and follows the sounds. The party follows, and after a few turns of the passageway, a huge creature bursts out of a collapsed doorway, surprising Mantis.  The party catches up just as a second umber hulk blasts from the wall. Kherek and Shining Brow are confused by its hypnotic gaze and flee from the fight, and other party members are temporarily bewildered, but the group takes down both creatures.  The room beyond is filled with smashed stone shelves and broken bottles, but nothing of value.

Mantis backtracks and discovers a chamber with an archway carved into the wall.  The keystone has a carving of an armadillo-like creature with feathered tusks. After casting a spell, he learns the arch is a magical gate that can be opened by a non-magical ferrous item.  Meanwhile, Tang Wu has wandered off on his own, and finds a circular room lit by pink light. Frescos cover the domed ceiling above, and two statues of dwarves in armor flank another set of double doors.

Tang Wu approaches, and the statues cross their axes in front of the door. Tang Wu tries to back away, but the suits of armor attack. The monk yells for help, and fights back. The party arrives and destroys the statues.  Mantis opens the door and discovers a large chamber with four alcoves. The alcoves contain large statues. Each statue represents a dwarven god, including Moradin, Clangeddin Silverbeard, and the gods of the hearth and the god of exploration. Offerings of coins and bottles covered in dust sit on the floor in front of each statue.  Mantis finds a brass cone covered in dwarven runes. Shazuu tries to read it, but the runes form incomplete sentences. He pockets the trinket.

The group decides that this is a good place to rest briefly and recover from the battles of the day.