Session 30: The Biggest Cube of Jello in Minnesota

The party decides to backtrack.  Mantis takes the lead, and the group arrives in a chamber with a pit in the center and a huge map of Undermountain on the wall.  The map is a cross section, and seems to show 23 levels. There are a few notes on the map. The 3rd level is labeled with a picture of a flaming skull, the 16th with a comet, and the 23rd with a tower.  Mantis discovers that the pictures are buttons. When pressed, a loud voice booms out instructions… all of them seem to indicate that this map can function as a travel gate, but is disabled from this end.  Possible destinations include Skullport, Stardock on level 16, and Halaster’s Tower on level 23.

The group examines the pit, only to discover a human trapped at the bottom. He claims to be named Halath Gark, a servant of Waukeen, and that he was left for dead by his previous company.  The party grudgingly decides to free him, and allow Gark to travel with the group. To show his willingness to help, Gark opens a secret door in the southern wall, and tells the group this is where his companions fled.

The party moves into the new tunnel, which is constructed of older stonework than the previous rooms.  Mantis finds yet another secret door, which leads to new chambers and a stairway leading down. After hearing goblins in the chambers ahead, the group decides to descend to the second level. 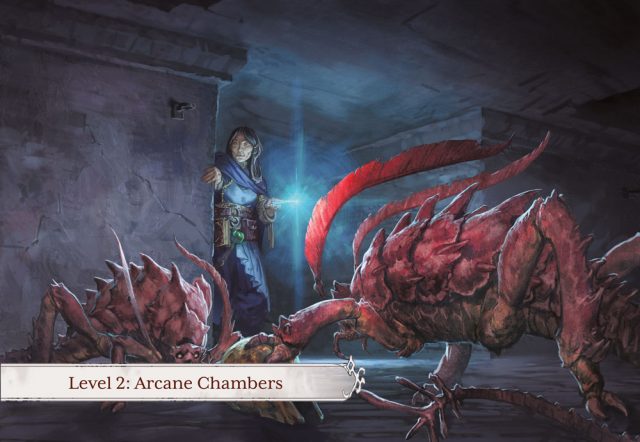 The stairs go down quite a distance, and end in a passage leading to a room full of trash. Dwarven statues have been defaced and replaced with crude images of goblins. Hammering noises come from the halls to the north.  Mantis scouts ahead and discovers a huge hall filled with tents set up among the pillars that support the ceiling. The party sneaks past several groups of goblins, some working to build a stage of sorts.  The party emerges from the tunnels around the hall, and are met by goblin guards. With Mantis’s goblin friend Little Buddy translating, the group learns that this is a marketplace. The guards warn not to cause trouble.

Mantis sneaks into a side chamber, where he finds a very attractive human man, lounging on cushions surrounded by goblins and bugbears.  A naked dwarf is chained in the center of the wall, beaten and wounded. Mantis talks to the man, who is called “Yek the Tall”, and after a short conversation, is told to leave Yek alone.  One of the goblins draws Shining Brow aside, and asks for help. Apparently, Yek is actually a goblin wearing a cursed crown. The goblin promises free passage through their lair if the group will help get the crown away from Yek. Shining Brow asks for the dwarf to be freed, and for weapons for their companion.  The goblin agrees. Shining Brow gathers the party, and after discussion, they begin to plan a fast assault. The goblin tells his brethren in the room to let the party work without interference, and the group sets to work.

Shining Brow goes invisible, sneaking into the chamber.  Tygorr puts the bugbears into magical sleep, and Shining Brow uses mage hand to steal the crown.  Yek turns back into a goblin, as the rest start to cheer. Mantis and Shining Brow attempt to free the dwarf.  As soon as he is released, the dwarf furiously charges his captors, and Mantis and Shining brow are forced to restrain him.  At that moment, Gark enters the chamber, sees the restrained dwarf, and stabs him to death. Apparently the dwarf was a former party member. After Shining Brow parades the crown around the market, the group places the magic item in their bag.  The group decides to part ways with Gark, who they do not trust.

The party moves forward, passing through a hallway covered in moving dwarven frescos.  A side hall contains unsettling carvings, with an altar in the center. On the top is a pile of melted gold, and the altar itself is covered in abyssal script.  Shazuu translates. “A gift of flesh willingly given can feed our eternal hunger.” Mantis sends Little Buddy to grab the gold, which reveals itself to be an ochre jelly.  Mantis splits it with a slash of his sword, and Tygorr and Shazuu blast it with magic. The ochre jelly smashes Little Buddy, who perishes and returns to the ether from which he came.  Mantis finishes the ochre jelly.

Moving on without their goblin companion, the group finds a large room.  Floating in the middle of the room is a silver skull. As the party looks into the room, Shining Brow proposes a bet as to who can score the killing blow on the skull.  No one seems willing to make the bet, so Shining Brow places a 5 platinum bounty on the skull. Shazuu charges in, only to find himself caught in some kind of clear substance.  Mantis tries to close the door, as the party realizes the entire chamber is filled with the largest gelatinous cube they have ever seen. The beasat is easily 30 feet long and wide.   Shazuu manages to free himself. The party unleashes an onslaught of magics, and the cube finally explodes inside of Mantis’s fireball. The skull falls to the ground, and the silvery sheen shatters as it hits the ground.  Exhausted, the group moves ahead to a safer location and sets up a Tiny Hut spell to camp and rest. 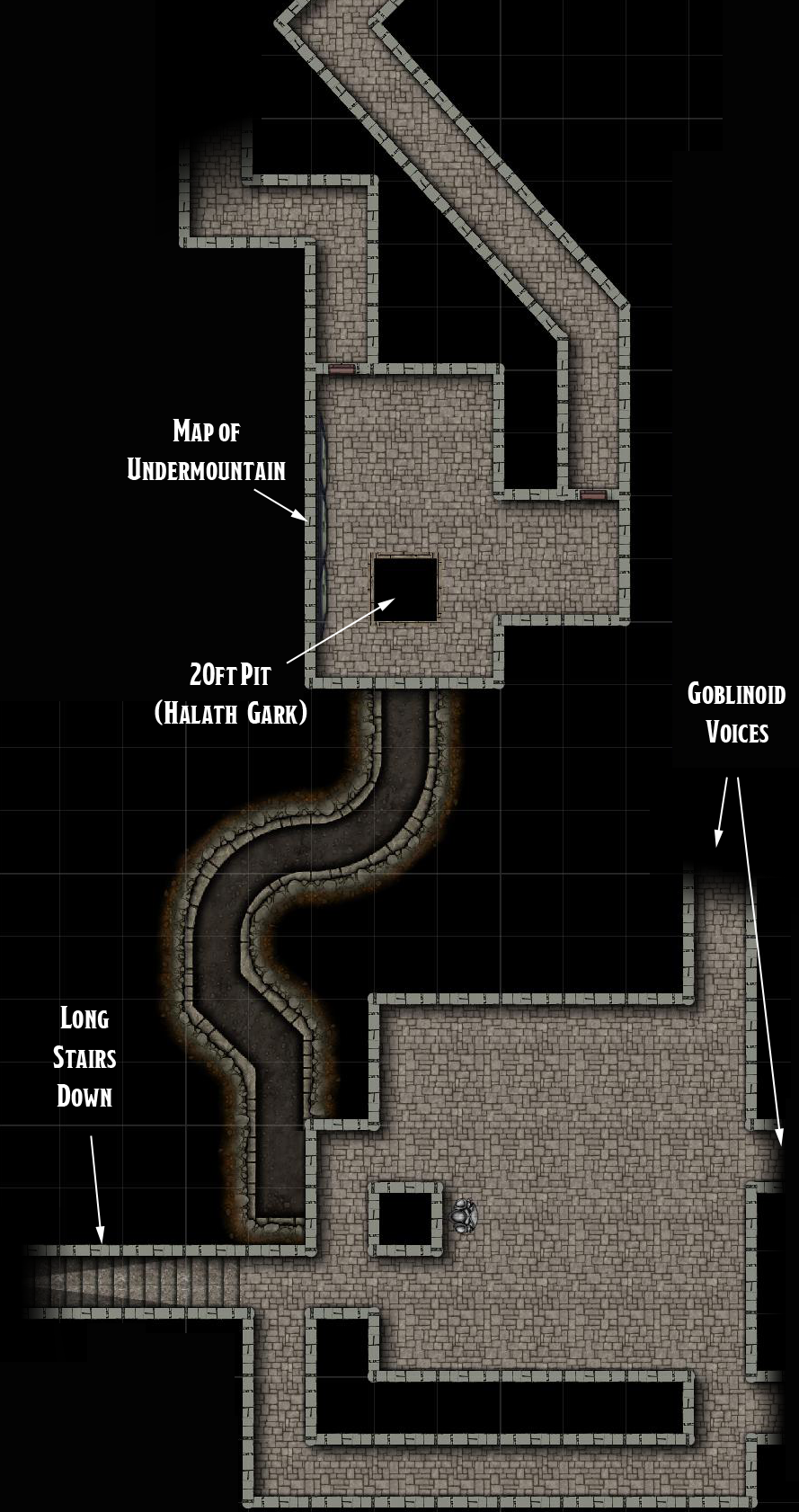 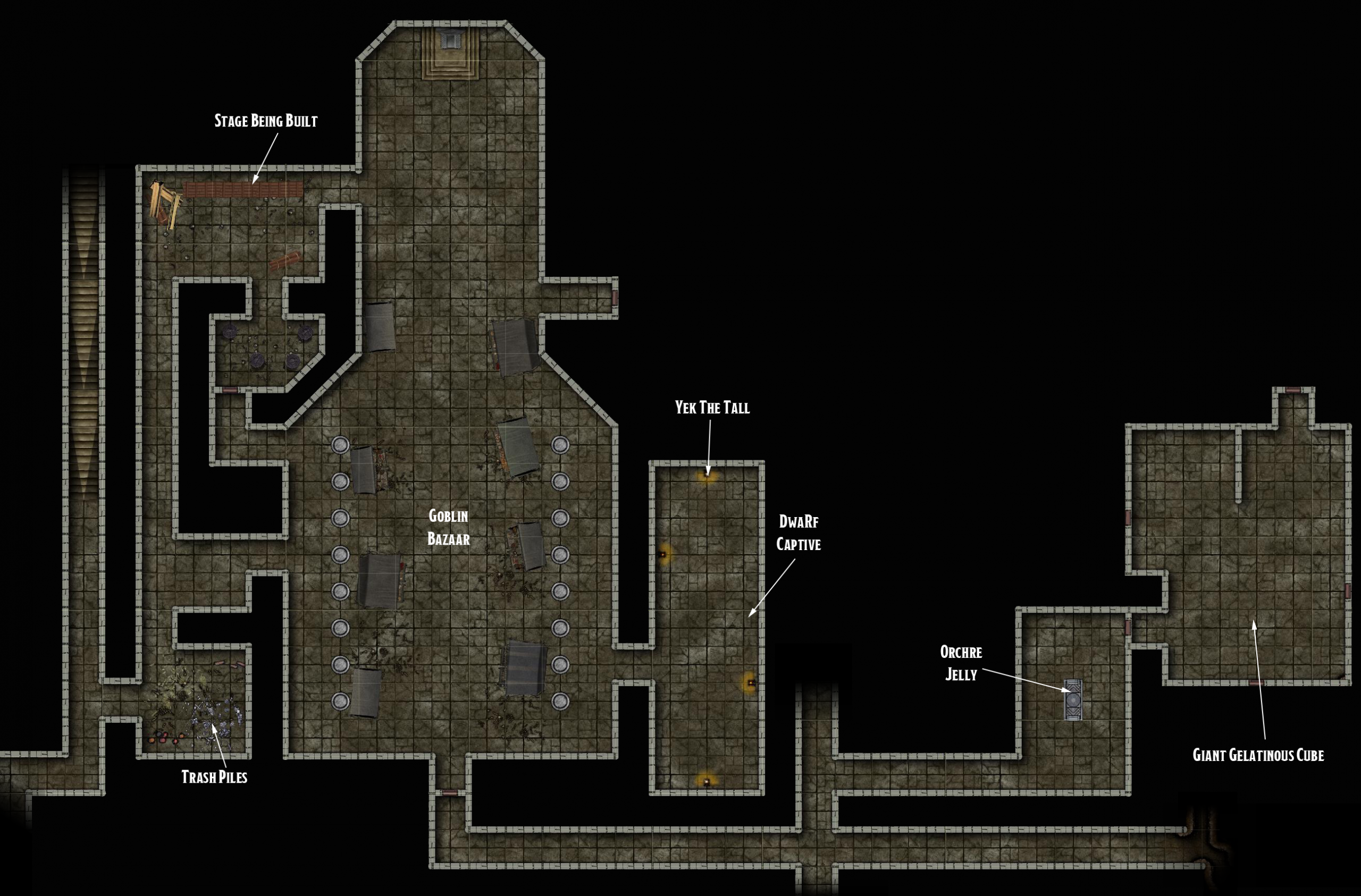