The campaign log for the 2018 ‘Swashbuckling’ DnD5e campaign. Entries appear in order, from newest to oldest. Feel free to make an account for the site if you want, to comment on news or log entries (either in or out of character, whatever you guys want).

We dock in the capitol city of Avarua, in Rarotonga. The Commodore throws a feast for us at the Amnish embassy. While there, the Governor hires us to head out of town, and fight a wizard, who’s set up 3 days ride out of town and started charging tolls on the road. We set out at dawn (after a memorable night).

We ride south for two days, passing small farms and inns. Eventually we come upon a tower. Outside is littered with sheep bodies, half eaten. As we approach the tower we’re attacked by a half monkey, half demon. We defeat it, and search the tower. We return to the city, and present our finding. We also acquire charts for the Isle of Black Powder.

We leave the next morning, and arrive there five days later. We approach the shore, to find a crashed ship. Upon investigation, we find a chest scattered among the wreckage. As we approach the chest, translucent figures rise from the waves, chanting…. “light the fuse, burn the sea”.

Nothing to see here… I think I missed this session….

We arrive at the Key district, and easily find Lane 26, warehouse 13. We quickly enter the warehouse (unseen?) Upon entering, Booth and Rob hide, while Lord Tarimikos enters and announces himself. “Hello? Is anyone there?” Orgott calls out from the darkness. He needs help, but ‘the Master’ is returning soon. We head deeper into the room and hear skuttling. We find ourselves surrounded by mechanical dolls.  We fight them, and manage to get to Orgott, who’s in a cage. “You’ve woken the master!” he cries.

A shambling beast made of a dead gnome and a suit of armor lurches out of the shadows, and attacks. We defeat it, and question Orgott and he fills us in on the story… He and Warren learned from Namin, but Namin died. They stuffed him in the armor, and raised him, but he wasn’t right. Warren left (we find a note), but Orgott stayed. A note from Warren states that he left for the Cozinar Islands, and that Orgott should follow if he ‘comes to his senses’.

We pick up right where we left off, three Sahuagin priestesses have risen from the waves, and have threatened to raise the dead to overtake our ship! We fight the priestesses, and the other sahuagin that the summon. Once we regroup on the ship, the captain casts off and we sail away, leaving wreckage in our wake.

A week later, we arrive in Lantan. After some quick questions at the local bar, we get directions to the Engineers guild. Some questions there identify the markings from the chest as apprentice marks… Marks belonging to Orgott and Warren Harrold who left with Master Namin, about a year ago. Namin wanted to fuse magic and technology?

While we’re walking back to the ship, a guild apprentice stops us and we have a long conversation, he lets us know that the apprentices are staying in a warehouse outside of the key district. He gives us directions.

Session 3: Return to the Dangreena Inn

The rest of the trip goes uneventfully. We arrive back at the Dangreena River Inn to find it closed, shuttered and guarded. We approach the door, and are ‘invited’ inside. We are met by armed assailants, who have the bartender at knifepoint. They have an offer to make us… they want the box. Qui manages to get the bartender freed, and starts negotiating a price for the box.

Meanwhile, Fraeiyn has snuck in the back door and find 3 assassins in the kitchen. The priest of Bane demands that we bring the box. Rob manages to distract one of them, and attacks! The party quickly presses the advantage, and after a quick battle they are slain… but one escapes. We quickly search the inn, and find counterfeit gold in their rooms. The guards arrive, we explain the situation, and they take the thief in hand.

The Captain has sent word… we are to report to Dock 9, Bay 4… the Marlin. Upon the way, we are confronted by Havilath and a moon elf named ‘Trevor’. They taunt us, the move along.

We arrive at dock 9, and present the captain with the box. The captain sheds some light on it’s contents… the weapons come from Lantan, an isle of Gnomes on the tip of the Sword Coast. She proposes hiring us to investigate. We accept. It’ a 6 day trek to Lantan.

Two days out at sea we see smoke in the distance. It’s another ship, aflame (or formerly aflame). We tack towards it. Once there we board the ship. It’s quiet, and still. It’s apparent to Rob that the ship was taken by Sahuagin. We make our way into the hold to find two locked doors to the crew quarters. Qui and Lord Big Britches kick open the door, and it’s filled with Zombies! We manage to defeat the zombies quickly, but there’s noise from above decks… a keening, screeching sound. We emerge to see three Sahuagin Priestesses floating above the water. From what they’re saying, it sounds like they’re summoning the dead to rise up and take our ship!

Session 2: Into the Fey

We pick up on shore, and in the water the Captain’s ship still burns. The smugglers flee out to sea, and out of sight. Rob swims out to the ship to check with the captain, and she instructs us to return to Murann, and await her return to the Inn. We quickly depart, and head a few hours down to road to find a spot to camp. Once we make camp, Fraeiyn opens the chest to find 3 flintlock pistols inside, as well as bullets and a few poches of (spoiled) smokepowder.

In the morning, we continue on the road. In a few hours we encounter a roadblock, of sorts. Two Ogres are blocking our way. “Are youse dem guys?”, they ask, then attack! We quickly dispatch one of them, and the other escapes into the forest. We follow, and stumble upon a strange scene. A pixie, and two fey are putting on a show, of sorts. Like actors on a stage, one of the fay slays the other… then attack us!

The pixie, and the nereid attack quickly, but Mardock spies another dark creature in the woods. They all attack, but the Fey are obviously under some sort of charm. We take out the assassin, but the pixie is killed. The assassin was obviously sent by Havilath.

Each of the player characters have been given instructions to seek work at the Dangreena River Inn, in the city of Murann, in Amn. There, they have been instructed to meet with ‘Captain Degee’, who has a job for them. The captain is assembling a group with special skills to undertake a difficult task.

The player characters all separately arrive in the city, and shortly thereafter make there way to the Dangreena River Inn, a small establishment with a taproom, and rooms to let upstairs. Once they arrive, and announce themselves to the bartender, each is guided to  private table, where they meet and introduce themselves. The party is made up of:

Fraeiyn – A Moon elf from the Sword Coast, armed with strange weapons. 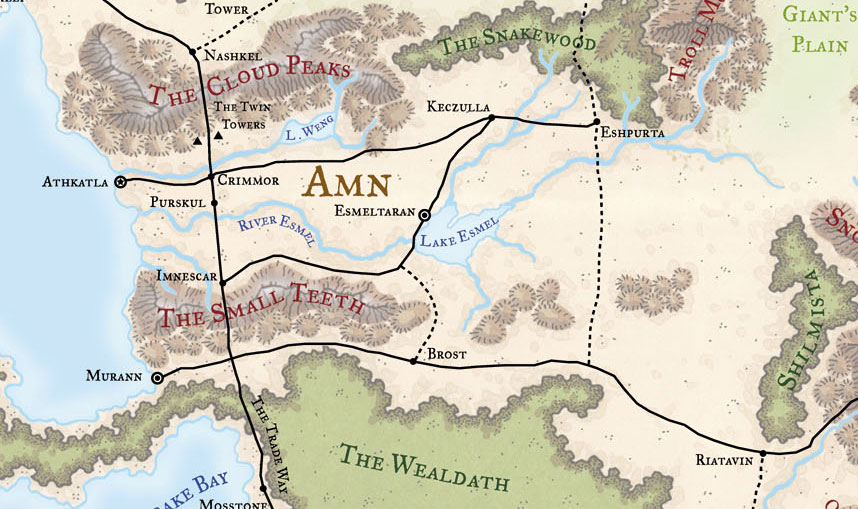 Mardock Beestringer – A Gnome Diviner and scholar, and his familiar, an owl.

Qui Feng – An exotic  Warrior from far off Kara-Tur.

Lord Tamikos – A Paladin of Lathander, and minor nobleman.

Robin Brightwave – A sea elf, and experienced as a sailor and scald.

Shortly thereafter, the group is met by a tiefling named Chance, Captain Degee’s first mate. Chance explains that the Captain’s been delayed, and he’s arrived to tell us a bit about the work that ‘s required of us. There’s some illicit activity going on at sea, and he’s been told to gather individuals of ‘certain skills’ to help. He’ll need stout fighters, and men familiar with Gnomish engineering and explosives. Familiarity with seafaring vessels is a plus, since this job may lead into deep water. Chance engages each of the applicants in turn, and seems to take a measure of them. Seemingly satisfied, he tells them to wait at the Inn, and someone will be along shortly to collect them.

After a short wait the bartender returns, and lets us know that the captain IS in the inn. She’s in the back room, and there’s a lot of noise coming from that direction! The group approaches, to find the captain under attack by masked assassins. The party fights off the assassins, capturing one and kill another. The leader escapes via some sort of magical means, but Fraeiyn pursues. After a tense chase in a busy, rain drenched market quarter, the attacker makes good his escape in the raging storm. While returning, Feng Qui is struck by lightning! Instead of being injured, he seems to take the lightning into himself. Unfortunately, none of his new companions are there to see this.

When the smoke clears, a few threats gets the captive to name the lead assassin as “Havilat”, a sailor (and assassin) of Zentil decent. He hired the other two men to kill help him the captain. Degee’ explains: The Zentharim are the ones that she’s investigating, and they’re out to silence her. The captain goes on to tell that she wants to hire the party to stop a shipment of ‘fake wands’ arriving at a cove a few days from now. Fraeiyn and Mardock, apparently the tinkers of the group, examine one of the broken ‘wands’ and find that they’re more like fireworks or pipe bombs… no wonder they’re exploding. It’s decided that the group will take the job…beginning with this shipment down the coast.

Chance leads the hastily assembled team a few days down the coast, by foot. The arrive at the the rendezvous point… a bare stretch of beach, with little to differentiate it from it’s surroundings. A reef prevents larger ships from approaching, and a cliff-face sits a few hundred yards away, providing a good vantage to see approaching ships. The group finds the remnants of a campsite, scouts out an ambush point and settles in to wait.

At near midnight, a ship arrives just outside of the reef. The party waits for them to come ashore, but they are ambushed themselves! Kobolds attack, keeping the group pinned down, while some sort of winged figures (Kenku? Aarakocra? Winged Elves?) fly from the cliff face to the ship, and begin to return with a chest. As the party contends with the kobolds, Captain Degee arrives by ship and launches an attack by sea. The party manages to take care of the kobolds, and a well placed shot by Fraeiyn downs the winged figure with the chest. Rob dives into the water, and defly recovers the case from under the waves. The ship, however, makes it’s escape. Degee’s borrowed vessel, it seems, isn’t much for combat, and is unable to pursue.

The party is left on the shore with a chest, and the ship floats, in flames, out in the bay.